Ponte Parodi is an urban wound in the heart of the city of Genoa, it bleeds and does not heal. Located in the center of the “Porto Antico”, the ancient port of the city, it is an incredible opportunity in defining the new Genoese waterfront, it is also home to an exceptional building: the Hennebique.
In Italy the decision-making machine is slow and rusty, today that precious urban void is inaccessible to citizens. Unfortunately, it is just the tugboats’ house and a sad maritime waste deposit.
However, something is changing, a new site has been built in this area and it seems that something is being done. What is it? What is the fate of this fundamental piece of the city? Before going into these questions, let’s try to understand what we are talking about.

Ponte Parodi is a quay in a state of neglect inside the port of Genoa, it extends for almost 23,000 square meters and was built as a maritime port. The space is accessible through a passage blocked by a gate, so in fact it is inaccessible.
On the bridge stands the Hennebique, which is a Liberty-style building in reinforced concrete built in 1901 by Giovanni Antonio Porcheddu. It was built for the storage of grains from maritime traffic and placed on the Santa Limbania pier. Its name derives from one of the inventors of reinforced concrete, François Hennebique, who carried out the patent for this innovation at the end of the 1800s. This is the first example in Italy of a construction made entirely of reinforced concrete.

Numerous urban planners and architects have spoken out about the opportunities linked to Ponte Parodi¹. At the dawn of Expo 1992 the reflections on the regeneration of the old port of Genoa began, including also Ponte Parodi. In those fundamental years the Municipality was thinking about a general vision of urban rebirth. However, Ponte Parodi failed to take advantage of this moment, as indeed it did not use the funds allocated for the G8 and did not become part of the Genoa European Capital of Culture circuit, also failed the attempt to transform the Hennebique into the Engineering University.

In 2000 a competition was announced by the Genoa Port Authority (owner of the area), among the finalists also OMA by Rem Koolhaas associated with the studio of Stefano Boeri², then the Foreign Office Architects³ and Giancarlo De Carlo Associati⁴. UN Studio by Ben van Berkel and Caroline Bos⁵ won through a “project financing” with the French company Altarea. As a further proof of the Italian inefficiency in completing public works, the project is still at a standstill, so Altarea has asked the municipality for economic damages due to delays.

Meanwhile, citizenship claims the right to space. In June 2017 the Spazio Darsena Architettura Workshop took place during the Bastimento Event⁶. This workshop was a six-day seminar during which architects, students, designers and graduate students tried to imagine temporary uses of the quay. Led by architects Patrizia Di Monte and Ignacio Gravalos, the initiative ended with the production of some provocative images that represent the abandoned bridge like a beach, a stage, an outdoor gym, a forest. 30,000 euros would be enough to implement these temporary interventions and the city would return in contact with this space, waiting for Godot, the great project of Ponte Parodi.

At the beginning of 2018, a preliminary agreement was signed between the Municipality of Genoa, the Liguria Region, the Superintendency of Cultural Heritage and the University of Genoa to try again to unlock the project. A few months later the construction site opens to secure the quay and demolish some buildings, through the so-called “preparatory works”. After the re-profiling of the pier, the belting is being completed, that is the realization of waterproof walls, which should allow the construction of a parking below the sea level. These interventions were already foreseen in the supplementary act⁷ to the concession stipulated by the company Porto Antico in 2011.
The vision of the current council, led by the mayor Marco Bucci, is that of a unique waterfront that goes from Boccadasse to the lighthouse of Genoa, passing by the Ex-Fiera del Mare and Ponte Parodi as indispensable connections. Hopefully, not everything will be solved in an underwater parking lot.

It seems clear that the project that won the competition in 2000 is no longer in line with the current situation, both in economic and architectural terms. The immense structure of the Hennebique silos is protected by the Cultural Heritage, therefore it will not be demolished. Thinking about a project that involves the creation of numerous activities and functions without integrating the Hennebique is madness, we must design the entire system as a whole. If the Hennebique structure will remain intact due to the historical/architectural constraints, we must first think about its role in the area and then eventually figure out which services could be added to complete the project. Otherwise, a surplus of activity would be generated, considering the scale of the existing building and the winning project of the competition, there would be no user needed to cover all the services offered, we are in Genoa, not in New York.
Today we have the idea of an immense jumble of activities at the foot of the Hennebique , which, for now, remains empty and without project destinations.

We talked about turning the Hennebique into a university, a hotel, a museum, a shipping agency headquarters, but none of these possibilities has been defined. Until a clear and definitive vision of this building is produced, one cannot think of designing Ponte Parodi as a whole. I believe that the necessary and sufficient characteristics of Ponte Parodi are the spatial qualities that already exist: the strategic position, the relationship with the city and the sea, the contact with the port, etc…, it would be enough to valorize these particularities. I don’t think there is need for anything but the space that already exists.
We could take advantage of the construction of the car park (which in any case is useful in the Porto Antico area) by authorizing the concession to the private company that will manage it in exchange for public works on the surface. These urban works should be limited to simple interventions, generating an urban void that could have the appearance of a park, in the center of the port and in the middle of the sea.
The Hennebique, on the other hand, could accommodate many different activities, also thanks to the structural organization for warehouses and double heights that would facilitate the division of the spaces. A hotel, a university library, a museum and the offices of shipping agencies could coexist in the same building following the logic of the structure, which is already divided into macrosectors. This approach would be consistent with the conformation of the city, which is dense and mixed, and would also be an economic advantage. In fact, dividing the building into several parts, one could ask the various investors to participate economically in the renovation of the building based on the quantity of square meters they would occupy.

Ponte Parodi is an incredible opportunity for the city; could be an important piece of urbanity enriching even more the crown on the head of the port, it could be a public park in the center of that urban amphitheater that is Genoa seen from the sea, it could be a living and pulsating building surrounded by authentic spaces, it could be an episode of urban planning starting from the characteristic identities of the place, it could be anything, but today it remains an abandoned and inaccessible place. 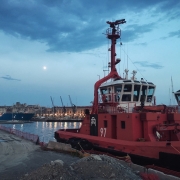 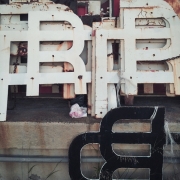 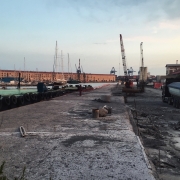 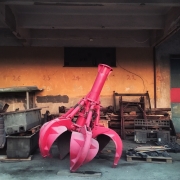 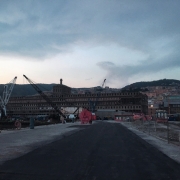 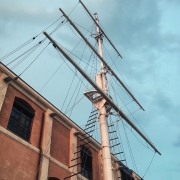 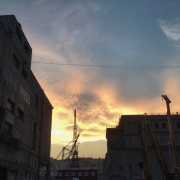 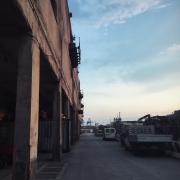 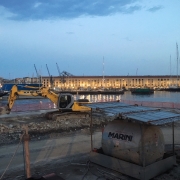 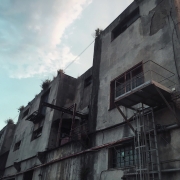 Marco Grattarola AdministratorKeymaster
He graduated in Architecture Sciences at the Polytechnic School of Genoa with a thesis on “Active Architecture”. He did two internships, in an art gallery and in an architecture studio. He currently attends the Master at the Polytechnic of Milan. His interests range from music to drawing, in which he experiments with curiosity and passion.
Email
marcograttarola@hotmail.it
Tel
+39 3493912848
follow me

Milan’s Railyards: the discriminant between development and standardisation