Much has already been written about the collapse of the Morandi Bridge in Genoa, the management of the situation by the Administration, the responsibilities and the culprits, the plans and the timing. Furthermore, I do not have the necessary skills to write something interesting about the technical matter: how was the structure of the Bridge and how it could be. So, I decided to tackle this issue first-hand.

On 14 August 2018 Genoa wakes up in a storm, yet another, at 11.36 am the soaked and heavy air vibrates desperately, and 38 cars are suspended in the void.
The Morandi Bridge has collapsed; I learn the news via Facebook, and I watch the images on the television. The first impact with the situation seems paradoxical to me, I feel insensitive and I do not fully realize what I am looking at. There and then I feel like I’m dreaming, so after a few minutes I decide to go to the Old Town.
I find the city still sleeping and its citizens, like sleepwalkers, are moving in the squares whispering the same thing. Visualizing the same nightmare.
I try to understand what’s going on, but helicopters fly threateningly around confusing my thoughts. The hysterical voices of journalists on television reverberate in the alleys. I cross my eyes with strangers who share my same uncertainty.
Victim count stops at 43, plus a city on its knees.
The following days the search for those responsible, the stories of the victims, the press releases, the political chronicle and the media reports.

I realized how worrying the situation was when I had to travel to the west, crossing the imaginary line that cuts off the urban fabric of the Ligurian capital. I felt a strong sense of frustration for the alienating conditions in which the city is concerned, a feeling shared among the thousands of citizens who are forced, every day, to spend hours in their cars, with the radio desperately trying to make them feel better. By touching the wound with my hand I realized how real it is.

Genoa is split in two, a destiny that has affected many cities in history for completely different reasons: Baarle (Belgium / Netherlands), Bergamo (high / low), Berlin (east / west), Budapest (Buda / Pest), Jerusalem (Israel / Palestine), Gorizia (Italy / Slovenia), Venice (islands / mainland), etc. … All these examples have different meanings, but they have a common symbol. The fate of Genoa is linked to the reading of that symbol, deciphering its shape according to its content.
The ideas on the issue are a bit confused and some dynamics are still to be focused. However, I decided to write about the reality surrounding this symbol, because of its resonance on me and the city in which I live.

By doing research in preparation for this article, I analyzed the area through a critical reading key very much linked to the editorial theme¹: the former railway yards and the urban voids. The first element that caught my attention was the Ex Campasso railway park, a former railway yard owned by Ferrovie dello Stato (Italian State Railways). The railway yard was abandoned for years and develops under the pylons of the Morandi Bridge. The area covers 72,671 square meters which were used by the Port of Genoa as a railway depot. This urban void is connected on one side to the main railway axis and on the other to the historic port of Genoa, through a tunnel (Landi Gallery) which continues up to San Benigno. This infrastructure represents a fundamental strategic element in the commercial development of the port. Moreover, considering its location, between Via Walter Fillak and Via della Pietra, it could be useful also for public transport.

In 2016, the Rete ferroviaria Italiana (Italian Railway Network), the Municipality of Genoa and the Port of Genoa agreed on a project² aimed at recovering the railway yard. In anticipation of the growth in freight traffic, which will be generated by the conclusion of the Terzo Valico (Third Pass) (2022³), they want to reopen the railway yard and restore the tunnel directed to the San Benigno Wharf. This connection can serve also Bettolo Wharf (nearing completion) and Sanità Wharf (already operational), the latter are currently connected to the main railway traffic by the Via Sommergibile (Submersible Road), which arrives at the park of Sampiarderena Shunting (Sampierdarena Smistamento). However, the new connection via the Landi tunnel will reduce travel times and lighten freight traffic by reusing an existing infrastructure.

Despite the reuse of the Campasso Railway Park as a dry port, the project envisages the reduction of the existing tracks from 32 to 8 and the transfer of the free surface obtained for urban use. In particular, they want to widen Via della Pietra through a work of compensation, allowing the passage of public transport and the improvement of the connection with the metro station of Brin. In addition, on the side of Via Fillak, along the entire road axis, a filter has been set up consisting of trees and environmental dunes that should shield the noise of the railway yard. The artificial dunes will create a linear park crossed by a pedestrian path. The necessary material has already been brought to the site, it comes from the excavations of the tunnels of the Genoa Railway Node, so they want to reuse the excavations waste to raise the level of the tracks by 80 cm and build the dunes with trees.
The project was resumed on 28 June 2018, when the Rete Ferrovia Italiana, the Port Authority, the Ministry of Infrastructure and Transport, the Liguria Region and the Municipality of Genoa, signed an Agreement that defines the schedule of interventions, establishing a total investment of 35 million euro⁴. The redevelopment project should be completed and active by 2021, before the activation of the Terzo Valico and the Genoa Nodo Ferroviario (Railway Node).

The information mentioned above are prior to the collapse of the bridge, after 14 August 2018 the area is transformed and takes on a different meaning. I believe that we must combine the redevelopment design of the area before the disaster, with the subsequent design, trying to find a balance. The recovery of the Campasso Railway Park should be implemented and the introduction of the state of emergency should speed up the process. The works already started could be completed by integrating the lots occupied by the houses to be demolished in Via Fillak and Via Porro into the project. The state funds that will come from the Decreto Genova (Decree Genova)⁵, will ensure the execution of the redevelopment works, as well as their urban development, therefore the project of the Via Fillak Park could be extended in the void left by the Morandi Bridge.

The void would take the form of a linear park, with an expansion adjacent to the base of the pylons of the “New Bridge”, where the conceptual value of the work could be concentrated. I am convinced that the symbolic component of the reconstruction intervention should be focused on the strengthening of the road network and the redevelopment of the urban area, rather than on some rhetorical element for its own sake. In this regard, the connection that can join the underground line with the railway line should be completed. In fact, the Genoa’s Metro is abruptly cut off near the Brin station, which borders on the surface with the Campasso Railway Park. The continuation of the Metro on the railway line would make it possible to reach Voltri using a so-called “surface subway”; linearly upgrading the existing subway, continuing towards the west, it would make sense to the whole body. The project has already been studied⁶ and also defines the construction of a tram network that would consolidate the new Genoese mobility. The investment to carry out the work was estimated at 450 million, which had been requested from the Ministry of Infrastructure and Transport in 2017⁷. However, in January 2018⁸, “only” 137 million were allocated which did not allow the total realization of the project. Therefore, the system has been reduced in size despite the agreements already signed between the Municipality of Genoa, Ferrovie dello Stato and Ansaldo STS. Considering the events following the collapse, this intervention should be speeded up by bureaucratic simplifications and state funding, locating in Campasso a key node for freight traffic and public transport. There would be space, funds and opportunities, to think of a station in the area of collapse, which could coordinate metropolitan and railway mobility, serving both and organizing the exchange. Even the long-awaited Alta Velocità (High Speed Railway) could arrive in the station of Campasso, avoiding entering the city fabric wasting too much time. However, the existing metro line (Brin-Brignole), would guarantee the connection of the station with the historic center.

The enormous urban void at the foot of the Morandi Bridge can also be exploited for the construction of the interchange car park, which is essential for the construction of the station: just along Via Fillak could branch off the entrances of the car park below the Railway Park, which is located 6 meters above street level. On 19 October 2018¹º, on the Campasso surface, a first interchange parking has already been completed (86 parking spaces), which will be used by citizens of the Val Polcevera to abandon the car at Brin and use the subway.

Before the collapse, the Bucci Council had resumed a redevelopment project inherited from the previous administration. The operation draws on the funds allocated in the Bando delle Periferie (Call of the Suburbs), a financing promoted by the Italian Government in the 2016 Legge di Stabilità (Stability Law). The Genoese financial plan provides for a total investment of 24 million euros, 18 of which should come from the Government while the remaining portion (6 million, equal to 25% of the final figure) will be partially covered by the municipal administration. The recovery and regeneration interventions involved in the project are many, in particular the transformation of the egg-poultry market of Campasso and the areas around it for public use. The sum earmarked for this redevelopment project is €4,928,400. The former Campasso Market “is a nineteenth-century building of considerable size, abandoned since the ’80s. The project aims to recover the parts that can be recognized by major demolitions, from 41,000 to 12,000 c.m., to create a mixed-use complex, with kindergarten and sports center. The property is owned by SPIM SpA, an in-house company of the Municipality of Genoa which has signed an agreement to confer the property while retaining its public use for at least 20 years, except for the fund plan that will house a small store serving the neighborhood, today completely without shops” ⁹. The property borders directly on the railway yard and could significantly affect the redevelopment of the area.

In conclusion, by implementing existing projects approved before 14 August 2018, a key urban and territorial hub can be created just before the collapse. The former Campasso Market would be a social pole for the neighborhood. The Brin metro station would serve the entire area and would continue in both directions. The Via Fillak Park would be linked to the “New Bridge” project, thus giving organic continuity to the whole. The Campasso Railway Park could organize the traffic on the railways by increasing the performance of the Port and at the same time would be a substantial node in strengthening the city mobility. And finally, the bridge would make the bridge. 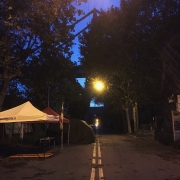 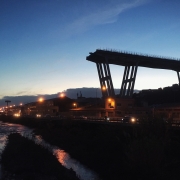 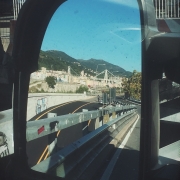 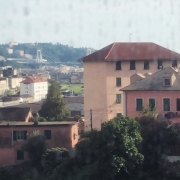 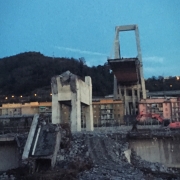 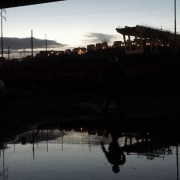 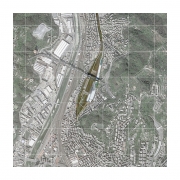 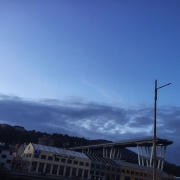 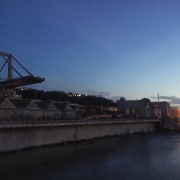 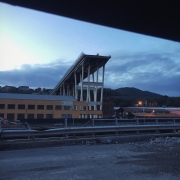 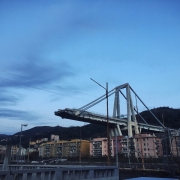 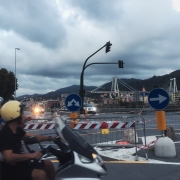 Marco Grattarola AdministratorKeymaster
He graduated in Architecture Sciences at the Polytechnic School of Genoa with a thesis on “Active Architecture”. He did two internships, in an art gallery and in an architecture studio. He currently attends the Master at the Polytechnic of Milan. His interests range from music to drawing, in which he experiments with curiosity and passion.
Email
marcograttarola@hotmail.it
Tel
+39 3493912848
follow me

A choice for Milan: Railway Yards and transformation of the city

The capsule of Time: interview with Joseph Grima

1 May 2019
We use cookies to make sure you can have the best experience on our site.OkPrivacy policy