In the last decades Milan is living an exponential development that is bringing to a mutation of its skyline. Starting from the fast development of Porta Garibaldi up to the CityLife quartier still under construction, new districts of the metropolitan city are taking over through glazed towers. In this architectural context a new project was born: “Fondazione Prada”. “Torre” Prada, the last piece of the mosaic OMA signed it’s completed and aim to be a frontier architecture in opposition to new districts. An architecture that aim to become lighthouse for the development of a gradual process of “gentrification”.

If you take a moment and try to imagine a building tower made, probably the first associations we think about are related to New York’s landscapes, where boxlike items of design stand to the sky. At the same way if you try to think about a museum, our conception of architectural space changes and it brings us to think to a low form, with a long extension with horizontal axis within which you find out big exhibition spaces.

Good. In Milan recently there is a new building capable of annihilate this rhetorical vision. A building that unites the spatial vertical development, typical of the buildings tower made, with the typical space of a museum. Prada’s Tower or even only “Tower”¹, as Koolhaas calls it, elevating it to a work of art, is the last piece of the incredible complex of “Fondazione Prada” in Milan, work of Rem Koolhaas with Chris van Duijin and Federico Pompiglioni of OMA.

The last building of the Dutch studio, opened last month for the “Design Week”, after 3 years from its opening completes one of the most symbolic architectural work that Milan has ever seen in last decades. All the complex, indeed, goes counter-trend to the idea of finding his space in the hearth of the city, ranks in the southern Quadrant of the city placed on the observation-deck rail yard of “Porta Romana”, precisely within an industrial complex where, in the 10s of the last century stood a distillery of the “Italian Association of Spirits”. A quite peripheral location, within a quarter that is ripen a shy gentrification phenomenon.

The “Tower” stands in a patronizing way on each corner’s complex, as if it wants to ignore the buildings and the contest that surround it. From the ex-rail yard it is hard to figure out the geometry that elevates itself to 60 meters and it seems to lean to an oblique stick that falls within the buildings behind it. A sharp volume that externally alternates very huge glass and white walls made with cement that develop on more levels with different heights. The reason of this loss, once you’re in, appears in a rude way. The structure develops itself on 9 floors, that alternates rectangular and trapezoidal plants, which their heights are from 2.7 meters of the first floor to 8 meters of the last floor, all of this to “create an intimate atmosphere for some works and another of grandeur for others.”² At the first floor we find the wardrobe and sanitation, going up there are 6 exhibition plans for a total of 2000 mq, a restaurant, a bar with a terrace at 360° on Milan. Going within the tower you get thrown in a strange form of Koolhaas’s postmodernism, where the generic lexical with which are used the material and with which the development of environment are denied in favor of a personal concept piece of architecture. The first impact with this reality is going in the space where the wardrobe and sanitation are located. There, two environments form a unique big space of trapezoidal irregular form. The materials and spatial development seems almost the willing of being an artist of Koolhaas, recreating another exhibition hall for his personal art exhibition. The visit within the tower can being made through two paths: going up the stairs of first floor (they’re amazing too) or the bottom-up way, deciding to arrive at last floor taking a particular elevator of 20 mq, decorated with pink onyx backlit. This one, located externally of the building volume, allows you to enjoy a slow climb, where is possible to admire the Milan’s sights.

Inside the exhibition hall, it is possible to admire the permanent exhibition named “ATLAS” that was born from the dialogue of Miuccia Prada and Germano Celant, with which the title describes the idea of mapping all the six-exhibition floor of the tower the visions and ideas that leaded the formation of Prada’s Collection. The collection includes work realized from 1960 and 2016 from various artists, such as Carla Accardi, Jeff Koons, Walter De Maria, Mona Hatoum, Edward Kienholz, Nancy Reddin Kienholz, Michael Heizer, Pino Pascali, William N. Copley, Damien Hirst, John Baldessari e Carsten Höller that are exposed in a sequence of spaces. Along the lines of the other buildings of Prada’s Foundation, even the exhibition halls submit a researched choice of materials. For the flooring it was used travertine, while for the both walls of exhibition halls and of the stairs, there is a singular choice of wood panels at oriented strands. Another recurring element on all the floors is the presence of a ceiling lighting established from thin stripes that with the glazed window create a reflex that opens to Milan’s skyline, as it wants to recreate the trend of train yard under the tower.

Not least is the restaurant on the 6th floor, that seems and exhibition hall with original elements of “Four Seasons Restaurant” of New York, built from Philip Johnson in 1958, installation elements “The Double Club” of Carsten Holler, three sculptures of Lucio Fontana and several paintings. The new Prada’s Tower gives an aura of border place. An incredible space studied for being made capable of the inclusion of new works. An architecture that has no rules for spaces organization or use of material. A “not space” that aim to be the most important exhibition space of modern and contemporary art in Milan. 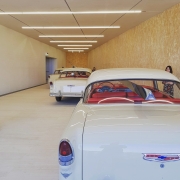 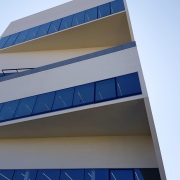 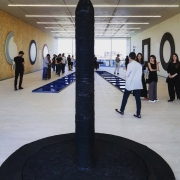 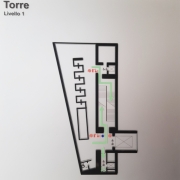 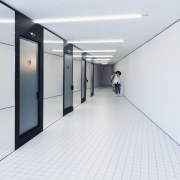 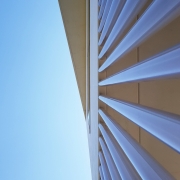 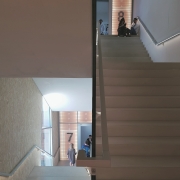 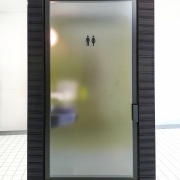 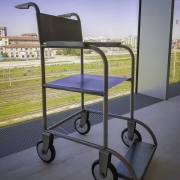 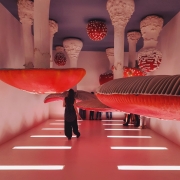 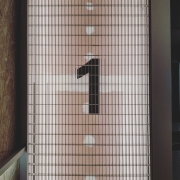 Look to the future with the science navigator: interview with Luca Mercalli

1 August 2018
We use cookies to make sure you can have the best experience on our site.OkPrivacy policy