The Great Mosque of Rome by Paolo Portoghesi today is certainly the most important place of prayer for the Muslim population of the city of Rome. It is the seat of the Islamic Cultural Centre of Italy, it acts as a monumental mosque and, alongside the other numerous centers of worship in the city, meets the religious needs of the Roman Islamic community. However, in the 1970s, when the project began to take off, the Portoghesi’s mosque represented what would be the first place of prayer for the Islamic faithful in Rome. Criticized by politicians and public opinion, the Mosque of Rome had a gestation of almost 20 years before it was inaugurated. Today, in addition to be the largest mosque in Europe, it is a wonderful example of how it was possible to make Arab culture converse with western culture and in particular with that of a city like Rome.

If we tried to find a phrase to better define the figure of Paolo Portoghesi, this would be found in a book written by one of his students. I quote: “The central and initial trait of Paolo Portoghesi’s works is kindness”¹. A few words that open a chapter of the book “Spirito fantastico e architettura moderna” by Guglielmo Bilancioni and that allow you to immediately enhance a personal imaginary of the Portoghesi figure.
Of course, the phrase quoted above refers to the work of the Roman architect and not to his person. However, it is enough to listen to his thought, or even share a few moments with him, to understand how the kindness of his architecture is nothing but the reflection of the man who created them. A kindness that should be interpreted as a propensity to sensitivity in the use of materials, in the adoption of technique (never abstract but always reasoned), in relation to the place and, more generally, sensitivity to the profession of the architect.
Looking at the works of Portoghesi and particularly the Mosque of Rome, you realize that you come into contact with what could be defined a system. A system that encompasses matter, place, forms and cultures by making all these elements communicate with each other.

Inaugurated in 1995, the Mosque of Rome saw the history already twenty years before that year. Wanted by the King Faysal of Saudi Arabia, it immediately attracted the criticism from politicians, architects and the public. In the ’70s, building such an architecture meant creating an Islamic place of worship for the first time in Rome, today as then the capital of Christianity. Fortunately, the opening of the Church towards other religions during those years and the commitment of politicians of the caliber of Argan and Andreotti favored the success of this project, making possible the realization of what is now the largest mosque in Europe and one of the greatest architectural works of modern Rome.

The Mosque of Rome, beyond the faith professed by each individual visitor, more than an architecture it represents an experience. An intricate series of analogies and relationships between the culture of the Islamic world and that of the Western world, where the Roman architectural tradition dialogues explicitly with the Arab one. This experience begins even before crossing the gates that delimit the sacred space. In fact, the first contact with the mosque occurs in the approach phase, when you leave the roads of the capital city and you enter a sort of district at the foot of Mount Antenne. The state of quiet that occurs in this area is particular. The noises of the city disappear and at the foot of a large forest, which develops on the adjacent hill, stands a monumental structure with warm colors and geometries that create a sort of pleasant singularity. You realize you’re dealing with something different.
Once you have crossed the gates, the first impact is of a material nature. A series of concentric curves drawn on the ground with white stone invite you to continue towards the first marble fountain, inside which there is one of the first references related to both Islamic culture and the poetics of Portoghesi. The bottom of the basin is in fact also characterized by a drawing with concentric circles that refers to the description of the seven skies mentioned in the Koran and, at the same time, refers to one of the Portoghesi’s theories: magnetic fields.

This theory, which lays the foundations for the volumetric development of the mosque, refers to the distance effect theorized in the world of physics and similarly re-proposes the same principle applied to architecture. In the specific case of the mosque, the two polarities, which generate the concentric circles of the magnetic field and which determine the double curvature of the longitudinal axis of the work, should be attributed to the city of Rome and Mecca.
This theory, however, is not to be interpreted purely as a formal procedure. The idea that architecture can create a remote effect, implies that it carries with it not only a trace but also everything related to the culture of the place from which the magnetic field originates.

Through this key of interpretation, it becomes easier to intuit and understand the geometry of the work, and what were the measures taken to model the forms that could make the Roman culture dialogue with the Arab one.
Leaving the marble fountain behind, you can see what is perhaps the best known elevation of this architecture. On the left stands the large space that houses the prayer hall surmounted outside by a burnished dome, while centrally a second part of the building is characterized by a tripartite development and marked in the center by a water channel. Almost as if to recall the Salk Institute of Louis Kahn, the canal passes scenically between two large monumental staircases and climbs a third that leads to the entrance of the prayer hall. Here a sort of artificial forest of columns opens up, referring to the palms of Muhammad’s house in Medina, whose shape has been reworked in order to evoke the gesture of the hands that are composed in prayer. The dense colonnade that extends for almost the entire length of the mosque seems to want to recreate a whole with the forest around it.
Entering the prayer hall, the heart of the mosque, is a bit like seeing the sea for the first time. It is something that however much you try to imagine, it is not as expected. You can try to recognize a certain arrangement of the elements and try to associate everything to cases already seen, but the dome is something different. The prayer hall is something different. It’s Borromini, Guarini, Vittone and Nervi put together. This is the magnificence of the dome of Sant’Ivo alla Sapienza, steeped in Dante’s and Koranic rhetoric, which was then enriched with the arches of the Great Mosque of Cordoba.

Paolo Portoghesi’s mosque is all of this. An elaborate analog machine that takes the elements of two different cultures and, following the spirit of the place and inserting itself without violence, transforms them by creating something new. 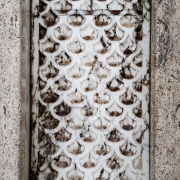 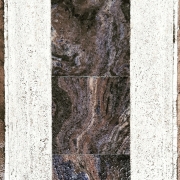 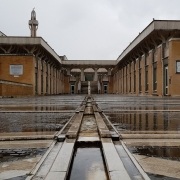 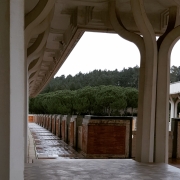 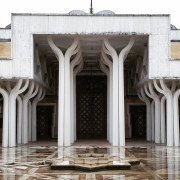 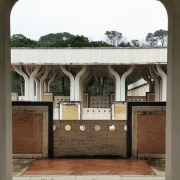 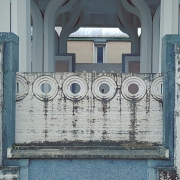 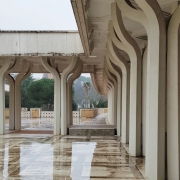 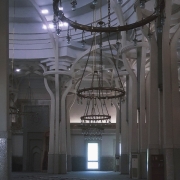 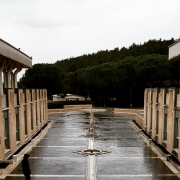 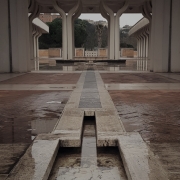 The Urban Void in Generation Z

1 September 2019
We use cookies to make sure you can have the best experience on our site.OkPrivacy policy