Now in its 16th year, the Venice Architecture Biennale boasts a new entry in the list of exhibition pavilions. The Vatican, which only in recent years has begun to attend the environments of the Venice Biennale of Art, this year has decided to participate also in the Architecture Biennale. Ten architects from all over the world were asked to create a pavilion on the island of San Giorgio.

The expression that probably could best define the Vatican Pavilion of the 16th Venice Biennale of Architecture is: dialogue with contemporary culture. It is with these words that Cardinal Gianfranco Ravasi, President of the Pontifical Council for Culture and promoter of the Holy See Pavilion, recounts the Church’s encounter with the Venetian event.

This is the first time that the Vatican has exhibited with its own pavilion at the Architecture Biennale and for the occasion it wanted to do things on a large scale. First of all, we can talk about the location, which is certainly an exception. In fact, the island of San Giorgio Maggiore was chosen as the place for the “debut”, specifically the wood that extends behind the homonymous Palladian church. To coordinate the project, Francescò Dal Co and Micol Forti who, with the aforementioned Cardinal Ravasi, have created a widespread pavilion consisting of ten chapels. Ten architects from all over the world have designed them: Andrew Berman, Francesco Cellini, Javier Corvalán, Ricardo Flores and Eva Prats, Norman Foster, Terunobu Fujimori, Sean Godsell, Carla Juaçaba, Francesco Magnani, Traudy Pelzel, Smiljan Radic and Eduardo Souto de Moura.

As far as the subject is concerned, this is deeply linked to the place where it was decided to exhibit. The idea of a widespread pavilion, in fact, takes as its main reference the Chapel of the forest by Erik Gunnar Asplund, built in 1920 in the cemetery of Stockholm. This was conceived, as Cardinal Ravasi explains, “as a landing place through which believers and non-believers, within a silence and mystical space, could enter into dialogue with God or more generally with transcendence”¹. In this case, the type of chapel often imagined as a place attached to a larger religious environment, is deprived of its natural location to be placed within a more abstract context: a forest. And it is precisely the forest, intended as a metaphor for the impervious wanderings of life, that makes possible for visitors to enjoy a route – a pilgrimage – along the ten chapels. The appearance of these places, within a natural environment, allows these to become a reason for orientation and reflection.

The path opens through an eleventh structure called “Zero Chapel”. This, created by Francesco Magnani and Traudy Pelzel, collects archival material concerning the Chapel of the Asplund Woods in its entirety, thus introducing the visitor to the general theme.

The rich and articulated rhetorical compromise leads to a path, whose way is manifested as you approach the different chapels. There are no traces or signs that indicate a predetermined path, the chapels are discovered crossing the trees as you explore the forest. The path to follow is so articulated, and so different is the style and shape of each structure that you come across along the way. In fact, since no particular constraints were given to the different designers, each of them developed a very personal interpretation of the theme. Walking through the woods of the Venetian island, one by one the different chapels appear, prostrating themselves as autonomous and individual objects in front of the disoriented visitor. Some of these small architectures are linked to the techniques and culture of the countries of origin of the individual designers; this is the case of the Chilean Smilijan Radic and Andrew Berman who respectively chose to develop their project with reference to the “Chilean animite” and the balloon-frame, typical of the South American tradition. Other structures, on the other hand, refer to a sort of reinterpretation of the cross in a technological and allegorical key. This is the case of the chapel by Norman Foster, who decided to recreate a tensegrity-structure from three crosses of different heights, and the Japanese Terunobu Fujimori who, instead, wanted to transfigure the historical condition of the Christianity in Japanese lands through architecture. A special case is that obtained from the two chapels of Sean Godsell and Javier Corvalan, whose interpretation of the theme does not distance itself too much from a vision of a chapel as a dynamic machine capable of being placed wherever it is needed.

Among the various projects, the winner of the “Leone d’Oro” Eduardo Souto De Moura cannot be ignored. This is probably the designer who most of all, has proposed an environment capable of being immediately associated with a sacred space, although he himself is the first to say: “it is not a chapel, it is not a sanctuary and in any case it is not even a sepulcher. It is only a place enclosed between four stone walls“².

The most important private client of architecture in history has once again come back to talk about himself³, and has done so by moving away from the traditional schemes. Religious iconography has been strictly reduced to the symbol of the cross, shapes and materials bring to the fore a new architectural approach. It is difficult to identify, in some of these small architectures, a real reference to the “type of chapel”. The shapes used are so singular that, without the image of the cross, they could recall spaces with completely different functions and meanings.

The chapels of the Vatican Pavilion tell multiple and heterogeneous stories⁴. Stories linked to specific themes and historical moments, or that more simply want to be an expression of the link with the spirituality of the individual designer. A mosaic of ten tiles, in close dialogue with the adjacent Palladian church, which tells a sort of experimentation and approach of the Church with the different contemporary languages. 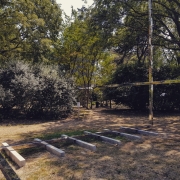 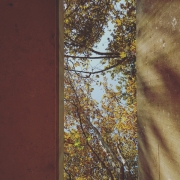 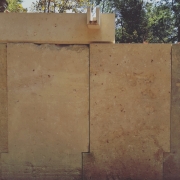 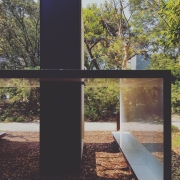 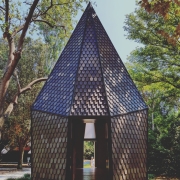 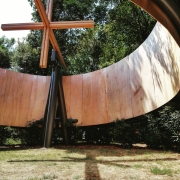 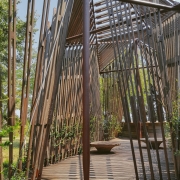 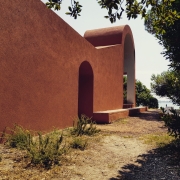 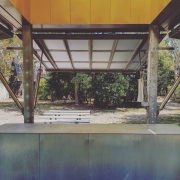 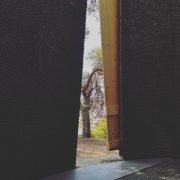 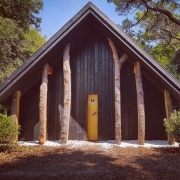 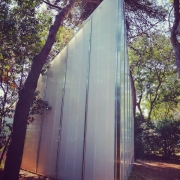 Harraga: traveling by burning the borders

From the Idea of migration to the Migration of ideas: interview with Luca Mazzari